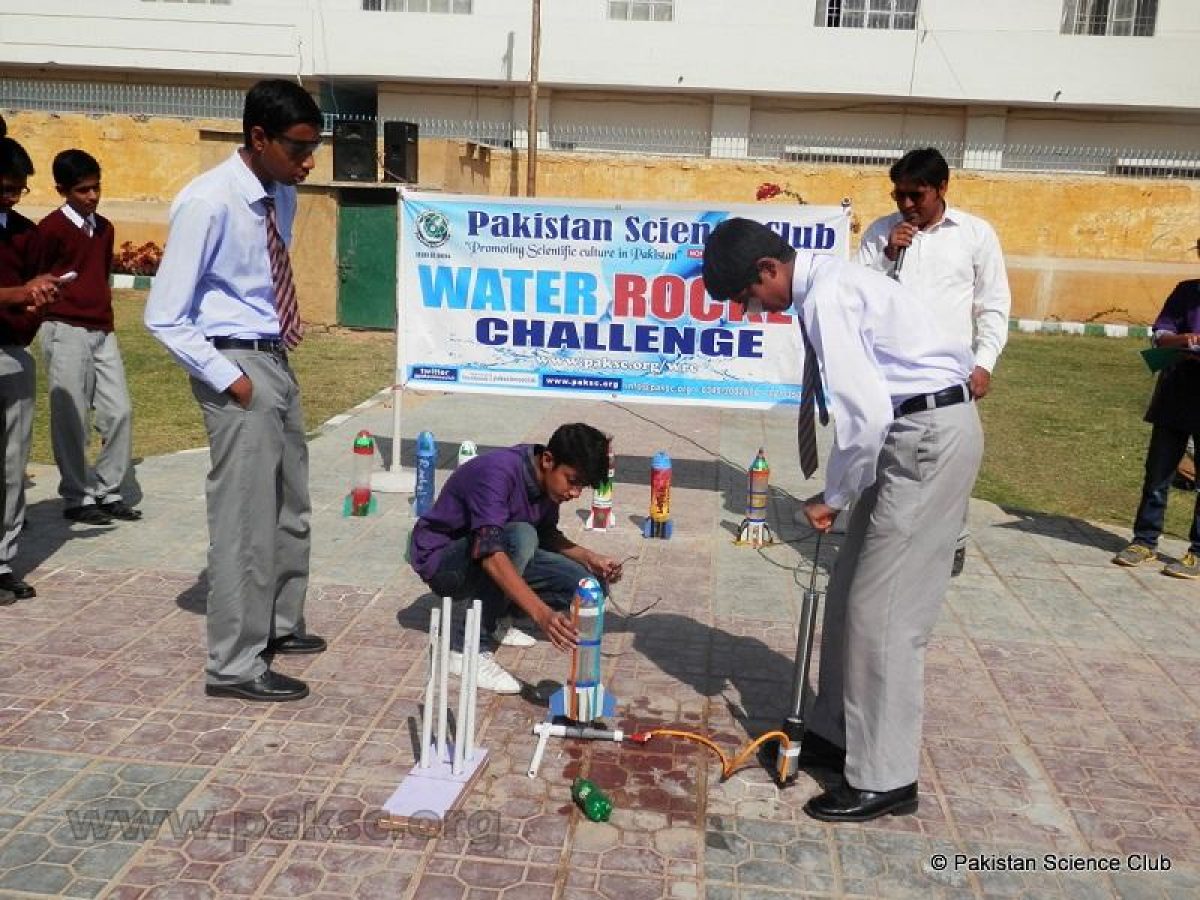 Pakistan Science Club Organises Water Rocket Challenge among school students  Water rocket making and its competitions are not new concepts but it has a long history behind it, no one exactly knows how old the idea is but it can be found in 1898. It is basically an idea to fly, to send something to the sky so we can say that man from very early stage wanted to fly,

he did a lot of experiments for it, tried many different things, and experienced something new every time and at last he succeeded to make an airplane, a rocket and then a space shuttle to travel not only in sky but also in space. Water rocket has special importance nowadays; it is an interesting source of learning and entertainment as well. It is an easy way to teach the students about the principles of aeronautics and about the aerodynamics of any shape. It can be easily made from one or two empty soft drinks bottles with some other things, uses water and pressurized air for its launching. There is a lot of stuff on the internet about how to make water rockets, its different types, and its competitions around the world which shows its significance in this modern world.

Due to its importance in learning and in practical doings, a team of volunteers from the Pakistan science club organized an event namely ‘Water rocket challenge’ on school level for the students who always remain busy in learning and have no practical approach so that they could learn by doing something practical. Seven teams from 4 schools participated in it. Each team consisted of maximum 5 members. Before this event, they also organized water rocket workshop for students so they can learn how to make their rocket by using pet bottles. Team head Habab Idrees and Shehryar Anwar along with the team guided the students from different schools; the workshop activity was live broadcast through Pakistan science club webTV.

The ‘Water rocket challenge’ was held in Public Park on Tuesday 18th February 2014. The participant teams reached there at 10 a.m. Each team made two water rockets for the competition. Along with the participants, there is a huge gathering of their parents, school teachers, classmates and many other students who came to support their respective participants.

A team of volunteers guided the students on every step. A volunteer took each rocket to the judges for the judgment based on designing and aerodynamic structure of the rocket then one of the volunteer filled water in it up to a pre-defined volume. With every team there was a team member who pumped air pressure to 100psi and one volunteer launched every rocket to 90 degree vertical. A member noted time of flight with the help of a stopwatch. Others made videos and captured picture of every moment,

The Scholor’s Academy Team got 3rd position in WRC 2014.

Three rockets with maximum time were declared to have 1st, 2nd and 3rd positions and the souvenirs were given to teams from MIDasia, KCD Cambridge School and The Scholars Academy respectively. All the students have a great time, got new experiences and learned by doing.

The students while giving interviews to the media team of Pakistan science club expressed their feeling as;

Abdul Basit Imam: Thanks PSC for inviting us. I really enjoyed it. Some competitions should be held like this for enhancing the skills of students. Muhammad Huzaifa Siddiqui: I am very excited and happy. I want to thanks our school management at first and PSC for organized such a nice competition. Saad.A.Khan: First I would like to thanks Allah Almighty .I really enjoyed a lot. I am really thankful to the association of PSC. Syed Talha Gilani: It was a good day. I really thanks to Allah and support of our school. Thanks to PSC also. Muhammad Bilal Siddiqui: Thanks to PSC for inviting us and provide us the opportunity to show our skills. The victory encourages us to do better next time